It’s Christmas, and in a strange time.

I am reminded of the world of Narnia that Sophie loved so much as a small child, in particular of the story of The Lion, the Witch and the Wardrobe, in which a cruel witch holds the land of Narnia in thrall. Under her terrible dominion, Narnia has become a place in which it is “always winter, and never Christmas.”

Our own world has, for two years now, lived under Covid’s evil spell, with its seemingly no-end-in-sight narrowing of the lives of billions to the limits of a disease.

For us, as for the poor talking beasts of Narnia, each day has held the same bleak outlook: Always winter. Never Christmas.

But in Lewis’ story, through the noble lion Aslan’s sacrifice, the witch’s spell is broken. Narnia is freed. Its world redeemed.

Two millennia ago the Christian saga (which Lewis’ story references in allegorical terms) had its unlikely birth in a backwater province of the vast Roman Empire.

Eternity entered time, in the form of a little child. 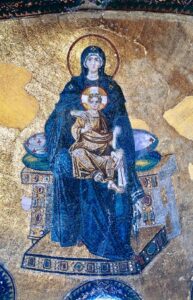 What cosmic energy was generated by the creative contradiction of that thought! The shock waves of it continue to echo outwards, a moment of creation like that of the universe itself, rippling past us to the end of time.

Nothing can stand before the power of that moment.

For, Spoiler Alert (in case you didn’t know it!): in the grand story of our universe—written before its very foundation, but played out within time—at the ending of all things, it is the good guy who finally wins.

So take heart. The spell upon our world will also be broken. As in little Sophie’s beloved Narnia, this winter too will end.