Sophia held her poetry in her mind. It was written there, long before pen took to paper. Sophia heard it as a living voice. Her work thus has a dramatic resonance. It is meant to be heard.

Here you will therefore find not only the texts of some of Sophia’s poems, but also audio copies. I wish it was Sophia reading it—the poetic voice, however, will always be hers. 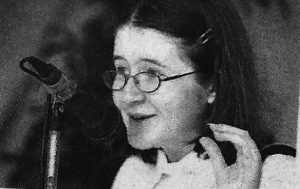 Newspaper clipping of Sophia at a poetry reading

“I started writing poetry ten years ago, when I was seven years old, so obviously my feelings about an awful lot of things have changed since then.
My poetry however seems to have undergone more of a process of evolution, and my analysis of it more an intellectual sharpening, than my feelings about the act and purpose of writing changed. I still aim for beauty and power, I still aim to fight against mortality, and I still write as much about a universe of the quick, haunted by their predecessors as much as I ever did.”

Sophia, age 17 (in a web-interview for the Queensland Poetry Festival)

The samples of Sophia’s non-fiction writing provided here cover both formal and informal modes, giving a sense of her cast of mind. It was a worldview Sophia developed early. A speech (given to Rotary), which she wrote when she was 13, reveals that the characteristic tenor of her thought was evident even at that age. When she writes in it of The Winter’s Tale showing her, in its  “imperfect happy ending”, the “wise truth” that, like Leontes, we cannot “ …undo all wrongs or heal all sorrows, but must value the joys that we have”, one hears the same clear note of courage, the same philosophic mind with which she was later to face her own mortality. The speech was about truth in literature, but truth was something Sophie lived out in all things.

Sophia loved books, she loved stories—she loved reading them, and she loved telling them. She was a born storyteller, always with an edge of both fantasy and history. In a story by a 5-year-old Sophia (who had become fascinated by the Ancient Egyptians), the soul of the Pharaoh’s dead wife comes to him in the shape of a bird to help him defeat an evil enemy with whom he battles in the desert. This rather set the tone for what was to come.

At the time of her death Sophia was working on a series of speculative fiction/sci fi novels set in a universe she created on the basis of a resonant and image-filled dream she had when she was 12 (though she was also doing research for an historical novel she planned next to write on the Plantagenet Stephen and Matilda). In Sophia’s fictional sci fi world, the descendants of humans (some of them genetically-modified for space travel) who crashed on a distant planet called Cicero 5 many centuries into our (old Earth’s) future, have, over subsequent millennia in their historical time, developed a complex world of divergent cultures and civilisations. At this point, however, their world is at a civilisational tipping point, that last moment of old systems before everything changes forever.