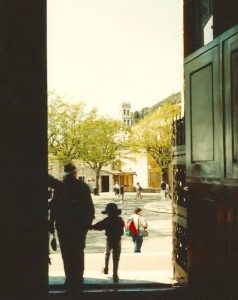 Sophie, age 4, with her beloved Auntie Kaye, stepping into the light, Assisi, Italy

This Christmas, Sophie’s article about Christian mission has really been resonating in my mind.

The article concludes with the following paragraph:

“Jesus didn’t lay out a grand plan for a Christian social system. He came to speak to individual men and women to lead them to faith. By busily searching for the mote in the eye of political institutions, one risks failing to see the beam in one’s own. Moreover, the conflation of Christian theology and political thought into a set of legislative benchmarks is failing to feed the hunger of a generation of young people who need something more than a collection of sociological adjectives to define their existence. The really radical message that Jesus gave us is one which sets before a Christian’s feet the arduous path of love and forgiveness. Christians can change society by preaching the Gospel, that is, by loving their fellows and, by such love, opening others’ hearts to grace. By doing so they will help to increase the number of good people in the world—and that, more than anything, is what the world urgently needs.”

Firstly, Sophie’s observation about the spiritual hunger of young people seems directly relevant to the present moment, given that defining people by their “sociological adjectives” has, in the years since her death in 2014, become increasingly central to the contemporary zeitgeist, and has proved just as lacking in spiritual nourishment as Sophie anticipated.

Secondly, I was struck by the lovely simplicity of the “if-then” structure of Sophie’s reference to love—that if we love another, then we open their hearts to grace.

There is a beautiful logic to this thought—so seemingly obvious that at first glimpse one might miss the significance of it.

Moreover, to live love in such a way makes each of us a vital spiritual force taking action in the world—not powerless in the face of all that is dark in existence, but rather a warrior for the light.

I know that Sophie’s love for me, which she lived out even in the most difficult period of her life, has made it possible for me not to be overwhelmed by darkness since her death.

By this my beautiful girl really has “opened my heart to grace”.

For, as the Christmas story tells us, grace is offered to us. It is Christ’s gift, given freely. We just have to open the doors of ourselves to receive it.

I think Sophie would wish to say this to everyone at Christmas: live love to another, help hearts to open, let the light in. . .