“Words,” says T.S. Eliot in Four Quartets, “after speech, reach/ Into the silence.” No matter how imperfect, how incomplete or broken are the tools we use to get there (as Eliot states: “Words strain/ Crack and sometimes break, under the burden”), the dance between time and stillness is where we find ourselves.

Words reach into the silence, into the stillness. Searching, failing, searching again. Yes, Sophia understood this. It was central to what she believed. You must seek the truth and you must speak it. You will fail and then you will begin again.

All beauty is made out of brokenness.

In the craziness of the world as it is at the moment (and it really is quite mad), it is good to be reminded of the necessity—and the power—of this truth.

Here, in the poem below, is a 14-year-old Sophia seeking the moment of stillness in time’s dance, reaching into and speaking beyond silence.

The poem is an unusual one for Sophia. Most of her poems are distanced from herself. They are mediated through mythological figures, characters, voices other than her own, and generally speak to universal themes.

Though this poem does have universal application, there is a biographical element to it. It was written in response to her Jewish bubbe, her grandmother on her father’s side, being found to be suffering from dementia.

Alzheimer’s is a cruel disease. It strips away so many of the things that make us uniquely human. However, in her powerful poem, Sophia seeks to return, in full measure, all that was lost. In its gravitas, in the sombre loveliness of its imagery, in its composed and stately cadence, it represents a quite deliberate act of beauty. There is a sternness to the beauty of it, but it is beautiful nevertheless (and to understand that stern beauty is to get closer to understanding Sophia).

As the world goes mad, perhaps we need to be reminded by a farseeing Sophia of our common human frailty. We are mortal creatures, born to die. All of us, irrespective of our nationality, our creeds, our ethnicities, our gifts or abilities, we are all vulnerable, breakable beings.

And often, we simply are broken. Life can—and usually does—break us all, and death will take us all.

This is “the religion without dogma,” the common human experience of suffering and loss which joins us together.

As the world looks down the barrel of a gun in the coming weeks, it is a lesson worth remembering and Sophia’s a voice worth hearing, her words reaching beyond silence to find us again. 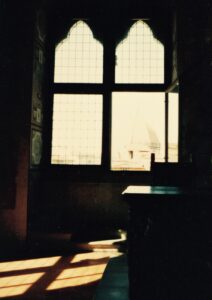 The march of time
Is all that is left to her now
It is an all encompassing
Ecstatic religion for her.

Silent, military in precision
Her life is counted out
In beats of unnoticed salutations.

She is sacred now
To the god of death
And as she approaches the mystery
She must, like all initiates learn its language.

They fear her now
For her knowledge of that other tongue.

I imagine her,
Neat,
Drawn as a skeleton
Her face illuminated by the mysteries of silence
Coming from some window,
Lit with the joyful faith of the painted martyrs.

Until I remember that she was not Christian
In the days before this cult of unthinking meditation.

And indeed the unconverted
Will sing over her
Without understanding
The purity of the religion without dogma.