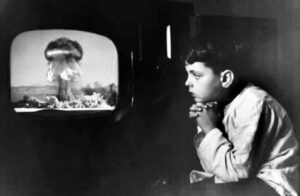 One of the poems Sophia wrote in her last year of life has gained added resonance in recent times. As the world has increasingly “slipped into the crazy timeline” (in the words of a perceptive friend), this poem reads like a warning.

From the wry opening stanza, with its ironic referencing of Oppenheimer and the Baghavad-Gita, to the scathing judgement of its final lines, it seems to map out the lethal combination of hubris, folly and malignancy in which we find ourselves.

For here we are,“gods of grinning skulls and black empty screens”, sleepwalking into catastrophe. Plague, famine, war—day by day, the phantasm becomes reality.

“You shall be as gods,” says the wily serpent to Eve in the Garden of Eden. The story, as you will remember, does not end well.

‘How shall we kill them?’ said the troll to the troll,
‘There shall be plague and famine too
Or war perhaps—with nuclear shots—
And let us not forget the lakes of pitch in the brew.’

The sleeping saint
Enmeshed in the angel’s peacock wings
Saw only the stalking shadow of his own revenging hand
For, prone and fevered, with our ragged lungs,
Would we not all blow down the Empire of the waking sun and knock the tiaras
from the waiting stars