Bearing Witness to the Truth

Pilate therefore said unto him, Art thou a king then?
Jesus answered, Thou sayest that I am a king.
To this end was I born, and for this cause came I into the world,
that I should bear witness unto the truth.
Every one that is of the truth heareth my voice.

The Gospel of St John does not describe the birth of Jesus. There is no journey of Mary and Joseph to Bethlehem, no stable, no star, no shepherds, no Three Wise Men.

It begins instead with a statement of metaphysical principle: In the beginning was the Word. . .

And yet there is an allusion to Christ’s birth in John’s Gospel and it is Christ who makes it: To this end was I born, and for this cause came I into the world, that I should bear witness unto the truth.

Pilate, a good Roman functionary doubtless educated in all the complexities of the Classical world’s rhetorical tradition, answers with a question. “What is truth?” he asks Jesus. Pilate’s attitude should be familiar to us, we Moderns, born into a materialistic and relativistic age, because it is our own. For us, as it was for the pragmatic Pilate, truth is a slippery concept, one able to be redrafted, rewritten, made “relevant” and therefore ultimately ignored.

Jesus doesn’t answer Pilate. The question hangs in the air—as much for us as it did for the 1st century Pontius Pilate—perhaps even more so.

It is, in fact, an increasingly critical question for us. We live in an absurd age, where the fundamental structures of logic itself are being inverted. “2+2=5,” is a statement attested to by more than a few ideologues these days (though one suspects that, in reality, most would baulk at boarding any vehicle or aircraft calibrated within such margins—after all, even charlatans have a sense of self-preservation).

“There is no ultimate truth. There is only power and who holds it. Truth is relative. It lies in the hands of the Pilates of this world and control of it must be wrested from them.” So preaches the chorus of our jaded era—and yet Christ’s silence is its own answer.

Where does the actual centre of power and authority lie in the confrontation of worldviews John gives us in his Gospel: does it rest with the public servant of the then-powerful but now-vanished empire, or with the bound and silent figure of Jesus, who, John tells us, was there at the beginning of all things and will be there at its end?

John perceives truth as crucial to the coherence of the universe and to our human understanding. There is an ultimate reality, an ultimate meaning. Christ is its embodiment, the living representation of it, the Alpha and Omega of it.

All of our own small existences are a journey towards truth. . . or they are nothing at all. Yet the world today is awash with duplicity and deceit. The lies are increasingly blatant and the liars more shameless. The assault on truth has become visible, even to those reluctant to see the moral descent into which we are speeding so recklessly.

The word that John uses for Truth is, in Greek, aletheia, which involves the sense of both revealing and “unforgetting” (Lethe was the name of the goddess of oblivion in the Classical pantheon; it was also the name of the river in the Underworld that induced forgetting in those who drank of it). The concept of “unforgetting” is a resonant one. It suggests that, in the search for truth, we need to “unforget” by seeing through all the trivia, the distractions, and the outright lies that dominate so much of our daily life. In this way, as John seeks to remind us in his Gospel, we will get closer to the truth which lies at the heart of all things. 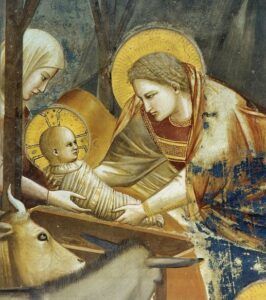 What, then, are we to make of the contemporary experience of Christmas, the meaning of which is buried in a suffocating layer of thoughtless indulgence? If we were, perhaps, to engage in some serious “unforgetting,” what is the truth that would be revealed to us in the Christmas story? It is simply this: Jesus came into this world as a baby, an infant held in his mother’s loving arms, living all the beauty—and the terrible vulnerability—of human interconnectedness. Love came into the world, and was loved in return. This is wonderfully, perilously, necessarily true.

We know love is true. We know when it is given to us, when we feel it at the core of our being, when we live it most deeply. As Sophia—who lived truthfully every day of her life—would say to us, this doesn’t mean that it is easy, or neat, or does not entail sorrow or suffering. Loss is written into every moment of love in this world. Born as he was to die on the Cross, Christ’s life is the very embodiment of that painful reality. Christ’s birth is God’s act of love to us: open to the Other, boundless in its profundity.

Love is the clear and perfect note that rings out in our lives. It rings out through the universe. It rings out in all truth, because it is the one true thing. We just have to be listening for it. As Jesus says to Pilate, “Those who are of the truth heareth my voice.”

We need to start listening, and soon.

I wish you an absolutely truthful Christmas. . .