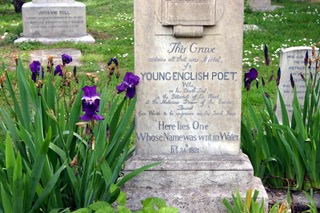 It is a select group, the band of poets who died young. The admission price is steep. I wish Sophia had not had to pay it. I wish she was not now, like Keats, “forever young.” Yet she is. She will always be 22, as he is 25.

“Bury me in garlands/ Of burning paper/ With all my pollen sparks of steel,” Sophie says in one of her poems. Fire and steel. The kid was fierce and she was brave.

She was more a Metaphysical than a Romantic poet, but she loved Keats. I read his poems at her graveside often. I know she would like that.

The last lines of the last poem she ever wrote were an allusion to Keats’ epitaph. “Here lies one whose name was writ in water,” is what Keats asked to be placed on his grave. To which Sophia replies: “And when the last line is cast/ Like a lure cast into water/ Nothing but ripple and rumour.”