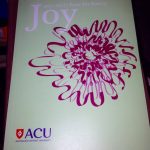 Sophia was, and is, a joy to me. It seemed appropriate to enter a poem into the 2017 ACU poetry competition which had “Joy” as its theme. It was a poem I wrote when Sophie was alive, over which she had passed her incisive critical eye, so I feel it bears a part of her.

Sophie was the best reader one could have—observant, precise, never self-interested, always focussed on the craft. How wonderful it was to share thought and work with that clear and lovely mind.

The poem, Orison, was shortlisted, and published in this year’s collection (named, obviously, Joy).

Orison is dedicated to Sophia. It bears a trace of her, forming one of those ripples of her life.

A last star lingers in lightening sky. Dawn
leaches into the sweep of space
full of suns extinguishing themselves
that lies above us, light seeping from the horizon line,
gathering itself together to arrive.

Outside, the waiting world stirs in its sleep,
a restless child dreaming its dreams.
Only some of us awake at this hour
listen for the coming day,
its small harbingers

sent before it, those soft-footed servants
laying out the detail of the unseen
like a suit of clothes. In my garden,
the tree fern unfolds itself into fractal existence,
a miracle of replication waiting

to be alive. A herd of bushy lilly pilly,
shaking off their shadows, shuffle into sight like
cows for morning milking; and in the distance,
the line of trees on my hill’s horizon,
a landscape of domes and minarets

etched in ink against the sky’s pale edge,
begin to form themselves
into trees again, feeling for their leaves.
This is how the day begins,
a slow re-constitution into the light,

as the world forms itself into nubby life,
all ten-fingered and toed, from the womb of night
to those attending. I am awake and waiting
for this arrival, senses tuned
to the breathing earth, its muscles relaxed

into the valley and its wooded crevices,
the hillside flung out like an arm
around us. For a moment, in an odd silence
caught between two thoughts,
nothing stirs, till a small wind slips

that curls up from the waking earth, it brushes
against us like a lover, shifting the birds
in their little sleeps, the small soft sounds
of their waking carried on its
drifting threads. And now

the light quickens. The slowly
turning tide of night to day
has reached its tipping point.
At any moment, morning will arrive.
It will arrive while I am watching it,

yet will arrive unseen, the slow gradual
of its hymnal suddenly alive, a flutter of eyelids,
an instant of missed time, and from the great
eucalypt that looks out over our hidden valley
the choirs of magpies sing,

sing jubilation
to the risen sun.