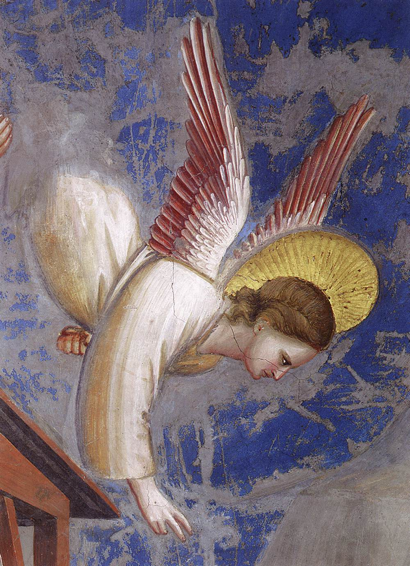 It is that time of year. Joy lies at the heart of it. Christmas signifies the astonishing concept at the centre of Christianity, that of the Incarnation (in which the Absolute Being sustaining all things but eternally existing—perfect and unchanging—outside them, entered our world, doing so in the most vulnerable and mutable of human forms, that of a tiny baby). Libraries have been written to unpack this notion. A lazy familiarity with the Christian story prevents many people from understanding its philosophical complexity (we are more amenable to the idea of “mystery” in the religion and philosophy of the East than in Christianity), but even in our ignorance we have retained a sense of the spiritual resonance of it. One hears still the echo of its astounding joy.

Death, says St Paul, is the last enemy—but it is also our first enemy. We are born to die. The paradox of the Christmas story is, of course, that through the birth into the world of a mere infant, Death is itself undone. A baby born to a tradesman’s wife in a nowhere town of a backwater province of a long dead empire, this baby forever changed the world.

The irony of that fact, the poetry of it, its charged symbolism, has rightly fuelled creative minds for two millennia. These days, we have just stopped looking at it—like the person on autopilot who walks, oblivious, past those they love.

We have forgotten how to see.

Profound sorrow is a fierce concentrator of attention. Brutal, even. I know because I have lived it.

My child, my only child—and such a beautiful child—died.

The death of one’s child is the deepest of all griefs. Parents can, quite literally, die of it. The mortality rates for bereaved parents, especially mothers, in the years after their children’s deaths occur at many times the average rate. Debbie Reynolds’ death so close to that of her daughter, Carrie Fisher, made sense to every grieving parent who heard of it. Frail old age just could not bear the stress of the death of her child.

But those of us not old, not frail, we do live; and for us the years go round in an endless cycle, round and round, each day lived without our child.

Each painful day—including Christmas Day. Christmas can be a hard time for those who have lost a child.

Such loss is inconceivable, until you live it. It generates devastation as complete as a cataclysmic meteor strike. The impact ripples out to the farthest edges of one’s life. Not an inch is untouched by it, not a moment. There is no full stop to grief, no “closure,” as the dreary cliché says. You don’t—and can never—“get over it.” Such loss unfolds across a lifetime, bound to the warp and weft of it. From the terrible instant of your child’s death to that of your own, it is knit into the fundamental structure on which life is built.

What one builds there is your ultimate answer to the cruel fact of your child’s death. The bereaved parent does not have the luxury of living thoughtlessly. They are forced to choose how to live in a world where their child does not, how to be. We bring to this sorrow everything we have in ourselves. You must choose how to live, and, in choosing, necessarily define who you are.

But then, choice is written into Christianity. It is the hidden key to the Christmas story.

Jesus chose to be born. He was born into this frail material existence, with all the pain and loss that went with it. He chose to be born and he chose to die, and in that death, destroyed Death itself.

“I am the resurrection, and the life,” Jesus tells us. “He that believeth in me, though he were dead, yet shall he live.”

Yes, Christmas is hard for bereaved parents. The merriness of “Merry Christmas!” is a difficult fit for those who grieve. However, Christmas also has something to say to us, to us particularly.

The star we place upon the Christmas tree is not just the star of prophecy, but also that of promise. It is a promise bereaved parents understand better than anyone.

This is the gift of Christmas each of us carries within us: From darkness, there will be light. From sorrow, joy.

Despite the tinsel, the commercialism, the worn out sermons, the empty salutations, despite all the shallowness in which we have buried the beauty and mystery of this day, the voice of the angel speaks to us. It speaks to me, as it speaks to every bereaved parent. I hear the sweet voice of my beautiful, beloved child in it.

Don’t be afraid. Joy to the world, this Christmas Day.