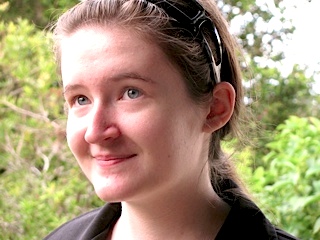 July 30th. It is once again Sophia’s birthday.

Twenty-eight years ago today, Sophia arrived in the world as she was to live in it: small and delicate in her physical frame, powerful in her presence.

Amidst all the danger and drama of the moment, little Sophia remained completely composed at the centre of a whirlwind of confusion. The words the midwife whispered into my ear in the operating theatre have a particular resonance: “You have a beautiful little girl. She’s just calmly looking around at the world with big eyes. You know, I think this one has been here before.” Sophia’s birth day was—as in all things pertaining to her—a compelling moment in time. Hers was a quietly commanding entry into a troubled and clamorous world.

In the years since her death, part of that clamour has been a growing undercurrent in contemporary culture which is hostile to the notion of human existence itself. It is better, some people say (a philosophical position known as antinatalism), never to have been born.

Is it? Is it better never to have been born?

It seems fitting on this, her birthday, to lay out what I believe Sophia herself would answer to such a question. Sophia knew better than anyone the reality of life and death. She had given thought to it since she was a small child—and ultimately, of course, she was to live it.

Sophia, as an historian, would tell us that the idea that it is “better never to have been born” is not by any means a new one. In the ancient world it was, for example, expressed in the story of Silenus, the immortal who was forced by Midas to reveal what was most to be desired for all humankind. Badgered into a reply, Silenus eventually burst out that: “…for humans, the best for them is not to be born at all, not to partake of nature’s excellence; not to be is best, for both sexes.”

Philosopher, David Benatar, is one of the most influential modern votaries of Silenus. The nature of human suffering is such, he says, that it would be better for all human beings never to have existed. In his view, existence is predicated solely in terms of pleasure and pain. The absence of the latter is a necessary good, while the absence of the former is neutral in effect. All life in the natural world is marked by pain and suffering. Sentience is an added burden that opens us only to understanding of our essential human predicament. Birth is awful, and death is awful—and what lies in between has no inherent significance. The best one can do is merely to create some semblance of meaning-without-meaning in a world empty of meaning. One therefore has a duty not to reproduce, not to bring other sentient beings into existence to share this inevitable misery.

At this point, I can see Sophie, ever scholarly, looking at us over the top of her spectacles. There are, she would observe, many problems with antinatalist thought, at least three of which challenge it foundationally, long before one gets to theological objections or even its societal implications.

Firstly (she would say), let us look at its basic premises.  We are asked to assume that “pain” and “pleasure” are universally measurable, with a relationship as necessary as 2+2=4.  In reality, however, even non-philosophers can recognise that this is not so.

Pain, for example, is not always a bad thing; nor is the absence of it a necessary good. For a start, pain functions as a useful reminder of threat. People born with a neurological inability to experience pain live lives of mortal danger. Most do not survive childhood. The absence of pain is thus for them definitely not a necessary good.

Moreover, a measure of pain can be a pathway to great benefit. The athlete who pushes themselves to their limit to win, the concert pianist left trembling with effort after playing a major work, the scientist who (like Australian Nobel Prize Laureate, Barry Marshall) tests his hypothesis on his own body, are all prepared to go to physical and mental extremes to achieve important goals. Avoiding pain would not be for them a necessary good. It would be an impediment.

Similarly, pleasure is not an unalloyed good, nor is the lack of it merely of neutral value.  Too much pleasure can literally be life threatening (as the mortality rates for various forms of addiction show). On the other hand, anhedonia or the inability to experience pleasure is a marker of severe psychological dysfunction. This too can be a life threatening condition.

Using pain and pleasure to underpin an argument for nonexistence is thus not as clear-cut as the antinatalist position assumes it to be. In particular, Benatar’s supposed asymmetry between the “good” of absence of pain and the neutral value of absence of pleasure gets lost among the complexities of subjective experience. What is good for me, may be bad for thee…a point which inevitably leads us to the next difficulty with Benatar’s argument.

Secondly then, Benatar’s antinatalism is flawed by a core logical inconsistency. On the one hand, it perceives humans in purely material terms, with pleasure and pain forming parameters of existence as simply structured as for a bacterium. On the other hand, antinatalism asserts that it is precisely our nature as sentient beings—with all the inherent subjectivity concomitant with consciousness—that lays us open to suffering. As Soph would say in her wry little way, one of these things is not like the other!

We are either—to quote a Star Trek episode—merely “ugly bags of mostly water” (and nothing else) or we exist as unique consciousnesses (in association with our material forms), experiencing subjective inner states, with all the messy individuality that this entails.

As point one indicated (see above), messy individuality actually seems to be all the go. In philosophical terms, this is called the “hard problem of consciousness”, which has proved to be an intractable conundrum for those seeking to wish it away. The antinatalist position plays an intellectual nut and shell game with consciousness, eliding over it so that the little irreducible nub of it seems to disappear—but, if you watch carefully, there it is nevertheless.  For it is, after all, our very sentience, our consciousness, the “innerness” of us that makes the vulnerability of the “outerness” of us so pressing.

Antinatalism’s third problem (and to Sophie—who was herself uncompromising in her honesty—it is a most egregious flaw) is that it asks those subscribing to it to live in what philosopher, Jean-Paul Satre, called bad faith.  It asks them to live a lie.

Life is pointless, Benatar would say. Suffering is pointless. We ugly bags of mostly water live and die with no real meaning to our existence.  One would think that suicide would be the rational response to such existential emptiness, but Benatar does not advocate suicide. Instead he suggests that antinatalists live “as if” there was some purpose to their lives, that they should build limited and transitional emotional and intellectual structures to sustain continued existence.

An ersatz purpose, in other words. The purpose you have when you don’t have a purpose.

I think Sophie would raise a quizzical eyebrow at this. “Why bother?” she would say to the antinatalist busily engaged in distracting themselves from the perceived void. Why not be like Melville’s Bartleby the scrivener, who just turns his face to the wall and slowly disappears himself from the process of existing?

Just stop. Cease to be. This would at least be an honest (if misguided) response.

But to see life as some sort of board game you play merely to keep the monster of nothingness at bay, as a distraction from your spiritual purposelessness, is to make of your existence an emptiness greater than the one you fear. It makes everything about you, every action you take, every relationship you have, every aspect of your life, every single moment of the “you” that lives it, a profound and utter lie.

And to promulgate such spiritual emptiness to another as an acceptable mode of being is, Soph would say, quite simply a moral wrong. One cannot live life “as if” it has meaning. It either has it or it does not.  It may be imperfectly realised (and some people stumble around for years before they catch even a glimmer of it). It may not take the shape you would prefer. It must, however, be true.

Sophie didn’t want less life. She wanted more of it. There was so much she planned to do, to feel, to see, to know.

That all this possibility was likely to be taken away from her was a grim reality that Sophie saw with complete clarity.  She was not, however, unmoored by it. Nor did she respond, a la Benatar, with manufactured meaning.

She believed that her life already had meaning. She believed that there was a telos, an ultimate purpose to the universe in which all our individual lives take part. That it might entail the loss of her own young life was something that Sophie was able to face steadily. Long before she became ill, Sophie had given thought to the problem of suffering. She had considered the logic of a theodicy that would account for the presence of suffering in a universe created by the Divine Good (which we call, so insufficiently, God).

I would make a terrible God.  If the unfolding of the universe were left to me I would be stopping people dying, preventing accidents, turning back floods and tsunamis. Suffering would be eliminated. You might think this a good thing. You would be wrong. Our human telos is to become truly ourselves, to fulfil the potential given to us, and to do so with integrity and beauty. This is the purpose of each individual life.  A universe held in existence by a me, no matter how kind or well intentioned I might be, would be ultimately unfree—and if we are unfree, then we will only ever be a shadow of the Being who “saves us from ourselves.” In such a world, however, we would never truly be ourselves.

My beautiful child was wiser than I (wiser too by far than a host of David Benatars).

I watched her, when faced by the thought of death, choose to be her truest self. I watched her do it.

“Call the world if you please the Vale of Soul-making,” said Keats (in a letter to his brother and sister-in-law).  Sophie would agree. We are each one of us poets of ourselves. Soul is the poem we make of it.

As part of the continuing poetry of Sophia’s life, this year’s Sophia Nugent-Siegal Award is given to gifted Queensland poet, Nathan Shepherdson.

The date for the reading of MTC Cronin’s Sometimes the Soul, will also be announced shortly.