Treasures from the Vault

Now that Telstra has accorded this half of your editorial team a reliable Internet connection, joys hitherto denied have become temptingly available.

The Internet is a treasure trove for anyone at all interested in history.

One can, for example, read some of the world’s oldest, rarest, and most beautiful books—the pages real almost to touch, each leaf turned as if by magic hand (here are some pages from the Lindisfarne Gospels, one of the most precious of Anglo-Saxon/ Celtic texts in the British Library).

Or listen to TS Eliot reading Four Quartets in those spare, dry, bank clerk tones of his ; or hear another reading of it, performed by the incomparable Sir Alec Guinness, a reading simply haunting in its beautiful clarity.

Or view NASA’s livestream from the International Space Station—an oddly hypnotic spectacle, rather like watching a giant fish swim with ponderous grace around a pond.

The Internet is a digital labyrinth, containing in its twists and turns, its strange byways and backwaters, some fascinating, engaging, and, more often than not, genuinely illuminating things.

As a connoisseur of quirkiness of longstanding, I promise to delve into the collective memory and unearth, at regular intervals, items of interest from the far reaches of the Internet, posting them in a series called Treasures from the Vault.

In homage to the somewhat archaeological tenor of the proceedings, the first unearthed treasure is this: the deft, witty, 1941 film, Pimpernel Smith (which is able to be viewed on YouTube

Delightful and serious in equal measure, the film was produced and directed by star of British film, Leslie Howard (known to many as Ashley Wilkes in Gone with the Wind). He also played Pimpernel Smith’s lead role, that of Cambridge don and noted archaeologist (I told you there was an archaeological connection), Horatio Smith.

In true donnish fashion, Horatio is seemingly absent-minded, unworldly, socially awkward and fearful of women, in thrall only to the statue of Aphrodite whose photo he carries in his wallet.

In reality, of course, he is the Shadow, the daring rescuer of prisoners held by the Nazis. Sought by the Gestapo, he constantly eludes them, frustrating the fleshy, Goering-lookalike, General von Graum, who determines to unmask and capture him. 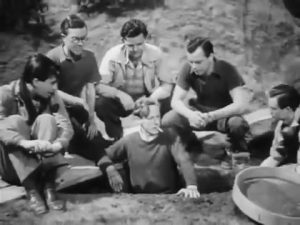 Smith takes a party of university students to Germany, ostensibly on a dig to investigate the likelihood of a supposed “Aryan civilisation”, but actually to engage in another rescue. The students (of course) get involved. There’s the complication of a pretty girl (of course), with whom our elusive hero finds himself falling in love. There’s even an actual dig and a large packing case of official archaeological “red herrings”.

Our hero nobly sacrifices himself to rescue the girl, the Nazis have him in their grasp…and there’s a wonderful ending you’ll have to see for yourself!

Pimpernel Smith was one of Leslie Howard’s contributions to the war effort. Riffing off his earlier successful pre-war film, The Scarlet Pimpernel, Pimpernel Smith is fast, funny, charming, yet with a distinctly sharp edge. Howard’s intention was to build morale, and he did so with a light but telling touch. He skewers the Nazis with humour in quintessentially British fashion. There are some very funny scenes; in one of which, von Graum even tries to get to grips with English humour, with Lewis Carroll, Edward Lear, PG Wodehouse, and Punch proving alike impenetrable for him and his equally humourless aide.

The Nazis did not take kindly to ridicule, and they regarded Leslie Howard as—in the words of Goebbels—“the most dangerous propagandist in the British service”. Howard’s death at their hands, shot down in a civilian flight from Portugal in 1943, has thus always been a matter of suspicion, regarded as more likely an assassination. Pimpernel Smith was one of Howard’s last films (The First Of the Few, in 1942, was his final film), which makes his moving speech at the end of Pimpernel Smith even more poignant.

But it is a fine and lovely little jewel of a film to leave as a legacy; larger than it seems, darker-edged and more resonant, and beautifully, cleverly crafted in both script and cinematography. It is well worth viewing even now.

Besides, for once the classicist gets the girl….

So take it out of the vault, dust it off, enjoy!