Contemplating the rationale for this blog (and leading on from Wittgenstein and the “rules” of communication), got me thinking about Star Trek (course it did—as sci fi nerds like Sophia would totally, totally understand).

Arguably one of the best, and certainly one of the most interesting Star Trek episodes was in The Next Generation, the late 80s-early 90s series starring the magisterial Patrick Stewart (bringing all that Shakespearean gravitas to the role). It is also worth considering in relation to the notion of the importance of transmitting the cultural lexicon, a concept which is so central to this blog.

Firstly, we need to lay out the narrative for those who are (sadly) not Star Trek proficient. The episode is entitled Darmok, and deals with the favourite Star Trek theme of “first contact”—in this case with the Tamarians or The Children of Tama, a people with whom the Federation had had 7 peaceful but (literally) inexplicable encounters over the previous century. Communication had never been able to be successfully established.

This time, however, a Tamarian ship had arrived at a planet called El-Adrel 4 and begun transmitting a signal into Federation space. Contact is clearly being sought, and Captain Picard, in true Star Trek style (boldly going where other less Shakespearean captains had failed to make headway), seeks to engage the Tamarians in diplomacy.

Data (the android commander) notes to Picard, with his usual precision, that, “The Tamarian seems to be stating the proper names of individuals and locations”—to which Picard replies, a little testily, “Yes, but what does it all mean?”

And that turns out to be the crucial question—what does it all mean?

In fact, it means a great deal, but, though the Enterprise’s universal translator is able to render the words into some sort of communicable form, the meaning behind the words is inaccessible. The Tamarians, it seems, have a unique language process (on which, more later).

Meanwhile, the Enterprise’s exchanges are equally incomprehensible to the Tamarians (and as dialogue on the Enterprise can include sentences such as: “Annular convergence 439. 05. Confinement resolution .527”, it’s not exactly hard to understand why).

After a heated discussion (which we cannot yet understand) between crewmembers on the Tamarian bridge, Dathon and Picard are both transported by the Tamarians to the planet’s surface, with the Tamarian ship preventing the Enterprise from communicating with Picard or transporting him off the planet. Dathon is similarly isolated on El-Adrel.

The story there unfolds. Dathon has placed them alone on this planet because he knows a threatening creature roams there, and he believes that together he and Picard will confront a common enemy and achieve successful communication (an outcome for which Dathon is courageously prepared to risk his life). Night falls. Dathon offers Picard a brand to light his fire, clearly with helpful intent. Picard thanks him but keeps his distance. The next day, the fearsome monster arrives. Picard and Dathon fight it together, and in the process Picard comes to the realisation that the Tamarian language operates “By citing example. By metaphor” (which is the case, sort of).

Unfortunately, the Enterprise seeks to transport Picard out, and though they are unsuccessful, they remove him just long enough for Dathon to be terribly injured. Night falls again. Picard tends Dathon, and in so doing begins to better understand the ground rules of the Tamarian language. Dathon tells the story of Darmok and Jalad, who, arriving separately on the island of Tanagra, fight a beast together, and thus leave the island as friends. He asks Picard to tell him a story, and Picard tells the Epic of Gilgamesh (the oldest work of human literature) which is about the death of a friend —or rather, the death of an enemy who had become the truest of companions.

And, of course, Dathon—Picard’s potential enemy who had become a companion—does die. Meanwhile, in space, battle is on the verge of breaking out. The Enterprise beams Picard off the planet, and he arrives back on the bridge just in time to speak to Dathon’s second-in-command. Using his new grasp of the basic principles of the Tamarian language (forged in his painful experience), Picard explains that he and Dathon had come to understand each other. Meaning is shared between humanity and Tamarians. Concord is reached. The Tamarian says, “Picard and Dathon at El-Adrel”—for now Picard and Dathon have themselves become an illustrative “story”—and the Tamarians depart.

The episode nears its end with Picard reading the Homeric Hymns (in an actual book, not on a data pad; Picard is something of an antiquarian). He says to Riker (his second-in-command) that connecting with humanity’s own mythology may aid communication with the Tamarians. In a final poignant moment, Picard takes up the knife Dathon had given him, and, using similar, ritual gestures to Dathon, silently honours his “enemy-become-companion”.

What is interesting about this, in terms of our business here at Lexicon, is that the Tamarian language is based on allusion, on referencing the past. Picard calls it metaphor. Counsellor Troi says it is based on images (which is more accurate, but still not quite right). Some Trek commentators have called it allegory, but that doesn’t nail it down either.

In essence it is a language grounded in literary and cultural reference. Assisted by non-verbal cues (and perhaps, one could hypothesise, by a measure of intraspecies telepathy), the Tamarians utilise shared allusions to communicate ideas.

How fascinating is that! Here, in fact, we have two world views—one grounded in science, in the (to us, and to the Enterprise’s crew) comfortable certainties of all those measurable “particle-sustaining beams hyperionising and disrupting the subspace carriers” (huh?); and the other, a worldview dense and rich in meaning inaccessible to those who do not share its world of cultural reference.

If we can just drive by Wittgenstein again (hello, Ludwig!), this is not really like the problem of being unable to speak “lionese” (Ludwig said that if a lion could speak we wouldn’t understand him). We cannot be lions. We can, however, tell stories, and we can understand stories. The Tamarian language is one based on what could be called embedded reference, where the words carry the full set of resonances contained in the story. 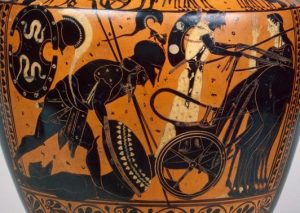 Let’s think about Homer (given that Picard was reading the Homeric Hymns), except we’ll take the Iliad instead. The Tamarian’s language system would be like our using, “Hector at Ilium” as a verbal unit. The limited, one-to-one correspondence is simply: “Hector, member of the Trojan royal house”. Yet, to merely see the limited reference would be to miss out on all the full and ghastly tragedy contained in the words—noble Hector, his brutal death, his mother’s grief, his body violated (an abhorrent concept to the Greeks), all the echoes of the ultimate destruction and desolation of the beauty of Troy, which, as the embodiment of civilisation, was ultimately broken (as all things human must be). All this is contained in the bare statement, “Hector at Ilium”.

This is an embedded reference, bearing within it the full weight of meaning shared by those who speak its “inner language”. And, in fact, cultures as a whole work in precisely this way, depending on a supportive network of associations to sustain them. If, for example, you do not have access to the Iliad in your mental architecture (i.e. in your cultural lexicon), if you do not share its narrative context, then that whole frame of reference is empty for you; it has no weight, no colour, no shape, no definition.  You are like the crew of the Enterprise trying to understand “Darmok and Jalad at Tanagra”—you may hear the words, but all meaning and resonance is lost.

Picard says to Riker that reading the ancient myths of humankind may help to connect with the Tamarians, but the episode also suggests another, more profound interpretation—that the world of the Enterprise, dominated as it is by scientific rationalism, needs too to reconnect with those deeper cultural currents that bind us far more closely to each other than binary code.

It is a truism to say: “What is man? Man is the being that asks what he is”. Well, yes, and no. I think we should answer that question somewhat differently. What is humanity? We are the beings who tell each other stories, because in telling our stories we become what we are, we remember what we have been, we choose what we will be.

And we forget our stories at our peril—to do so would be a failure of terrible consequence, a failure at the heart of meaning.

As Dathon would gloomily say to us, “Shaka, when the walls fell”.