Blogpost in a Plague Year 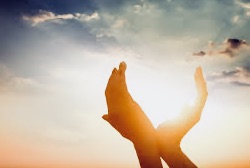 There is a very real sense in which the coronavirus epidemic is an overturning of the world.  Most people are aware—even if only subliminally—that our world has changed forever. Nothing, I suspect, will ever be quite the same again.

The death of one’s child gives a profound perspective on the fragility of human existence—a fragility now being borne out to us (as it has throughout history) in a time of plague—so I understand how disorienting the unfolding catastrophe of the pandemic is for so many people.

However, the terrible truth is that we are not promised “happy endings” in this mortal life. We are given a small moment in time to become fully ourselves. We must use it well.

But Sophia also believed that there is an ultimate reality beyond the world, which we glimpse in moments of spiritual intensity.

Since her death, the deep certainty of this has been made clear to me.

The Realm of Angels

Mal’akh in the old tongue
Angelos in Greek

On metaphored wings
The words sing into imagining

There is a light in things
Lived momently

We live in the realm of angels
And do not see